Once a common site across India , the Vulture population has shrunk to few thousands with few vulture species numbers in  hundreds…….. yes in hundreds. The bird which tried to stop “Ravan” form taking “Sita” to Lanka in Ramayana is in the critically endangered  list and needs a concentrated effort.

There are 9 species of Vultures in India

In the 1980s,  there were 80 million White-rumped Vulture in India, You could literally come across them daily during your outdoors,  then  it was the most populated  species of  raptor in the world.Today, the population numbers is in thousands.

The 4 Key reasons for such a catastrophic decline:

-Veterinary drug diclofenac , A drug administered to Live Stocks which has adversely affected the Vultures when the eat the dead animals ,Diclofenac was taken off the market in 2006, but is still available in certain parts of India.

-Slaughter Houses/Leather Industry, Now you would not find domestic animals like cow’s dying old in the fields , they old and sick are sold to the Leather Industry , this was there natural source of food for the vultures

-Ignorance, We could have acted fast in the 90’s, 00’s with conservation polices.

-Poachers, In the wild whenever the poachers kill any wild animals the vultures hover near the kill alerting the forest officials, Poachers have started poisoning them . 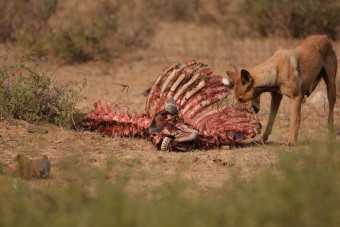 Well All is not lost yet not without a fight, right? In my recent winter skirmishes with the species , I was lucky to spot them numerously in the states of Rajasthan & Gujarat.

In Gujarat the Famous “PanjaraPol” (Skelton Pit)near Ahmedabad ,where the old cattle die a natural death and are left in open for the scavengers to feed on it is helping the vultures. I saw healthy population of vulture in Similar Skeleton Yards of Rajasthan

There are positive news from conservation stories in and around  the Ranthambore Tiger Reserve, Girnar Reserve Forest. Also during the 1300KM road trip, there was numerous sitings of at least 3 different species  along the country side , sometime the group was 20+.

Hopefully the marvelous birds survives for generations to see , Thanks for concerning !